About the Rutland Ospreys

About the Rutland Ospreys

Back from the brink

Intensive persecution and habitat loss during the 18th century led to the extinction of ospreys as a breeding bird in England in the 1847. They hung on in Scotland in remote areas until the last recorded breeding in 1916. But thanks to pioneering conservation efforts over the last 70 years, ospreys have made a triumphant return to the UK, in what is widely celebrated as an incredible conservation success story. You can be part of that story.

Meet our team of osprey experts, enjoy our shop and visitor centre, walk through the stunning nature reserve and see the ospreys on their nest

All the ospreys that have been translocated or born as part of the Rutland Osprey Project are fitted with two rings: a colour Darvic ring (usually blue and white), which has a unique identifying number on it, and a BTO metal ring. The colour rings can be read at a distance through binoculars, allowing us to identify individual birds. We refer to 'our' ospreys using these codes, so 33(11) has the number '33' on his blue ring and was born in 2011. We have only named one osprey, and that is our Manton Bay female - Maya. Three ospreys are also satellite tracked using lightweight transmitters. This allows us to track them up and down their migration routes, giving us an invaluable insight into the life of an osprey beyond Rutland Water.

The Rutland Osprey Project reached a milestone in 2001 when 03(97), a male osprey translocated to Rutland Water in 1997, raised a single chick with an unringed female close to the reservoir. This was the start of eighteen years of breeding Ospreys in the area and a huge success for conservation. Over 150 young ospreys have fledged from nests in the Rutland Water area since the first chick in 2001. We now have a self-sustaining population; twelve Rutland-born ospreys are currently breeding, and Scottish females are helping to swell the population too. Most of the nests are situated on private land, however, one pair breed on the nature reserve in Manton Bay. You can find out more about some of our ospreys below.

Ospreys are an incredible bird of prey. They live exclusively on fish, have a wingspan of just over 1.5 metres and can turn one of their toes a full 180 degrees! They dive into water feet-first to catch fish, using power talons to catch their prey. Ospreys in the UK migrate south to Africa every winter - a journey of over 3,000 miles to Senegal and the Gambia - and they do this without their parents. They can live for around 20 years. 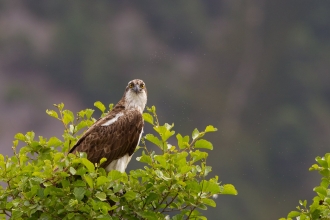 Wildlife Cruises at Rutland Water are the ultimate way to experience ospreys and other wildlife for yourself. Set sail aboard the… 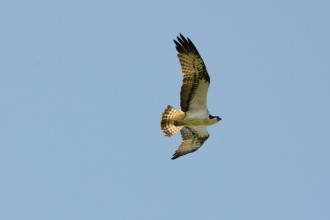 The Rutland Ospreys form an excellent starting point for school children to engage with all areas of the school curriculum, and we link… 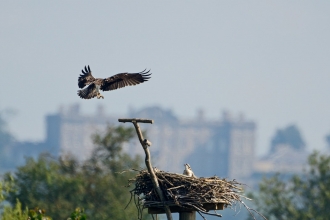 Home of the iconic Rutland Ospreys, and one half of the beautiful Rutland Water Nature Reserve, Lyndon Nature Reserve lies on the south…

History of the Rutland Osprey Project

Ospreys have been using Rutland Water as a stop-off during their migrations to and from Scotland for years, almost as long as the reservoir has existed. However, despite a healthy and growing Scottish population, it was estimated that it could take at least 150 years for ospreys to naturally re-colonise the whole of the UK. With some pioneering efforts and outstanding stakeholder working, the Rutland Osprey Project was about to change all this, and see ospreys soaring over central England once more...